Acetaldehyde or ethanal is a key component of wine. Formed during the alcoholic fermentation it can bind with SO2. In a context of stronger demand for low sulfites wines, managing the ethanal production during the Wineaking process is a key issue. The proper choice of wine yeasts and bacteria are thus key factors in determining the final levels of acetaldehyde produced.

Acetaldehyde (or ethanal) is the most important volatile wine carbonyl compound and can be formed both biologically (through yeast activity) and chemically (by wine oxidation). It is a small and highly reactive molecule with a green grass, apple-like or nutty aroma. It is very volatile and flavour active (Nykanen, 1986) with a sensory threshold of approximately 100 mg/L in table wines, and chemically very reactive.

Why ethanal is important in wine ?

Jakowetz et al., (2011) determined that the most relevant SO2 binding compounds were acetaldehyde, pyruvic and α-ketoglutaric acids because of their binding properties and their usually high concentrations in wines. Acetaldehyde typically accounts for 75% of the bound SO2 in white wines and 50% in red wines.

Its reactivity and ability to bind with sulfites explain to a large extent why wines need varying amounts of SO2 and why sulfur dioxide management is important in winery operations and post bottling stability.

Considering growing consumer awareness of the adverse health reactions associated with SO2 (Yang and Purchase, 1985; Snelten and Schaafsma, 1992), there are considerable efforts to reduce SO2 contents of wines, and since wines with higher acetaldehyde require more SO2, this can be a concern. Moreover, acetaldehyde has toxicological relevance itself. It readily binds to proteins (Tuma and Sorrell, 1985) and DNA (Hemminki and Suni, 1984).

How is acetaldehyde managed during the vinification ?

Acetaldehyde production can be reduced by choosing the appropriate yeast (Romano et al., 1994, Cheraiti et al., 2009, Jackowetz et al., 2012). It is mainly strain dependant but is independent of the amount of biomass produced. In many cases, a yeast strain with the highest population is not necessarily one with the highest acetaldehyde production or for that matter, degradation.

Usually wines, produced by modern vinification methods display fairly low amounts of acetaldehyde at the end of alcoholic fermentation, around 20 ppm in reds and 40 ppm in whites. With regard to re-utilization of acetaldehyde by yeast, winemaking practices that maintain a large number of viable yeast throughout the fermentation allow a better re-utilization of acetaldehyde. Accordingly, adding yeast nutrients and maintaining a moderate temperature (20°C) lead to reduced acetaldehyde residues, while maintaining a cool temperature (12°C) throughout fermentation and no addition of any nutrients lead to larger residues (Jackowetz et al., 2012). Jackowetz et al., (2012) showed that yeast produce more acetaldehyde in response to SO2 additions.

After alcoholic fermentation and removal of the yeast, few alternatives for the reduction of acetaldehyde remain. Wine bacteria have been shown to contribute to acetaldehyde degradation for a long time (Somers and Wescombe 1987). In a more recent study Jakowetz et al., (2011) have shown changes in acetaldehyde values during vinifications. Figure 2 from Jakowetz et al., (2011) show the initial biological formation by yeast is followed by a partial re-uptake. The second increase is due to involuntary chemical oxidation of ethanol. At 27 days, the wine was inoculated with bacteria to induce malolactic fermentation, which essentially removed all of the acetaldehyde. Because acetaldehyde can be used by wine bacteria, and because yeast can produce various amount of this compound, co-inoculation of yeast and bacteria can be an interesting winemaking practice to consider. For example, in white wines, the contribution of acetaldehyde is mainly negative as it increases bound and hence total SO2 levels. Co-inoculation becomes a great choice to control the production of acetaldehyde, amongst all the other advantages of co-inoculation (faster MLF, sensory contribution).

Malolactic fermentation also leads to the substantial reduction of pyruvic acid, and partial reduction of α-ketoglutaric acid. Hence, malolactic fermentation can make a significant contribution towards achieving lower bound and total SO2 levels by degrading these SO2 binding compounds. If a maximum degradation of acetaldehyde is desired, wines should not be stabilized until seven to ten days after malic acid depletion. 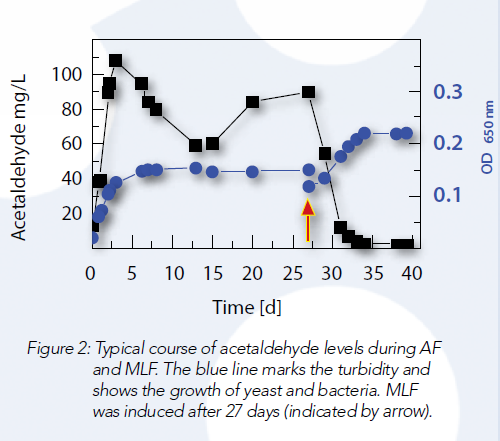 The first results shown are those of a study done on a synthetic must with 3 different yeasts, Lalvin S6U, Lalvin ICV D254 and Lalvin QA23. All those yeast have different fermentation rates. In Figure 3, we can see that there is a strong increase in acetaldehyde production during the exponential phase. It is then followed by a reduction until the end of alcoholic fermentation. In this study, the concentration varied at the maximum between the Lalvin S6U at 0,147 g/L, 0,087g/L for the LalvinQA23 and 0,05 g/L for the Lalvin ICV D254. The Lalvin ICV D254 had the faster fermentation rate and the lowest acetaldehyde production, whereas the slow fermenting Lalvin S6U had a higher acetaldehyde production. However, the final concentration is quite similar for all three yeasts, even though the maximum levels varies. 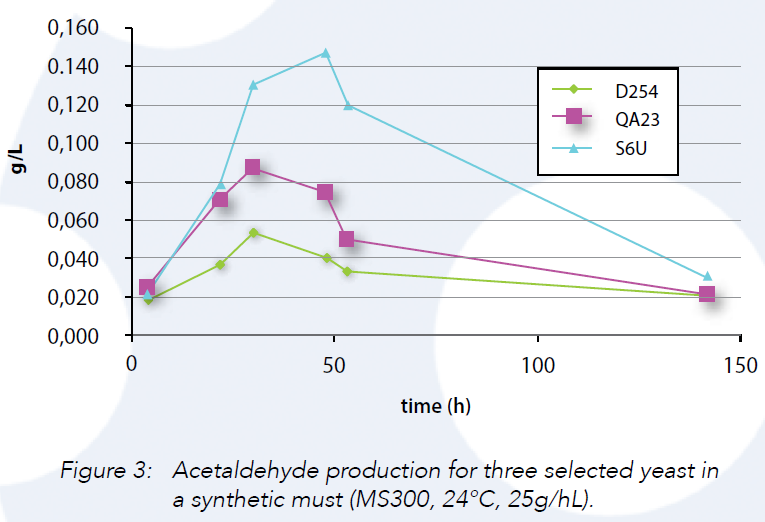 Lallemand wine yeasts were characterized for acetaldehyde production in a synthetic must during alcoholic fermentation. We can see in Figure 4a and 4b that even though some yeasts have very high maximum concentration of acetaldehyde at mid-fermentation (Figure 4b), it can differ from the final concentration (Figure 4a). For example, the yeast 21, has up to 120 mg/L during the maximum production, one of the highest levels, but the final concentration is a medium level at 15 mg/L. Generally, it is also found that there is no correlation between the maximum level found and the final level found. 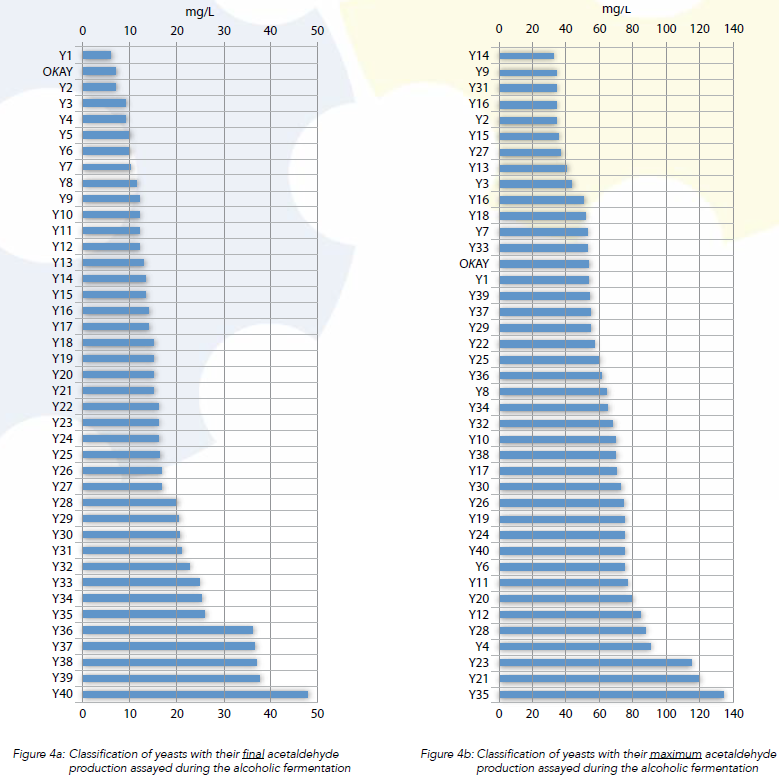 Wine bacteria also have the capacity to metabolize acetaldehyde. As shown in figure 5, during malolactic fermentation, the wine bacteria will degrade, after a short delay, acetaldehyde along with the degradation of malic acid. This is an important factor when choosing the wine bacteria, as it not only should be compatible with the yeast fermenting the must, but also a positive synergy between the yeast ability to produce acetaldehyde and the wine bacteria to use it efficiently can be factored in when pairing the micro-organisms for post-AF or co-inoculation. In a study done by Wei et al., (2011), it was shown that acetaldehyde concentrations peaked during early phases of Chardonnay fermentation regardless when the MLB were inoculated. However, the pH had a strong effect on the maximum acetaldehyde concentration depending if co-inoculation was used or post-AF inoculation (Table 1). 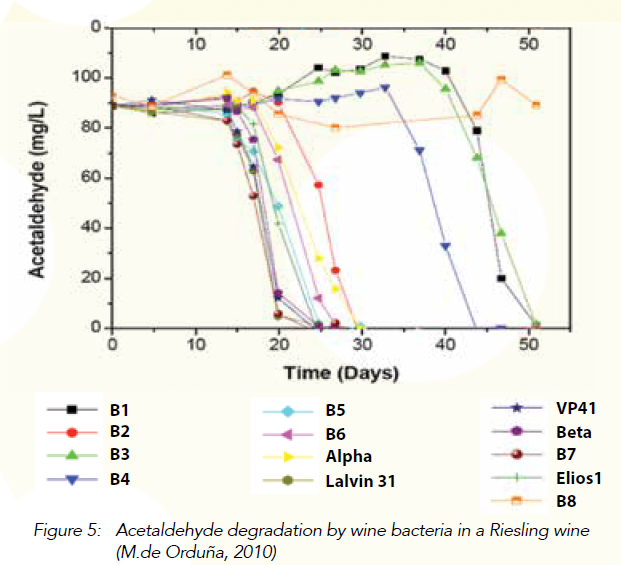 Jackowetz et al., (2011) also correlated the decrease in carbonyl compounds such as acetaldehyde with the bound SO2 levels. Across all wine bacteria strains, the decrease in average bound SO2 levels during MLF was 22%. The largest reduction in wine carbonyl content occurred in the week after completion of MLF and was a 53% (reduction from 107 mg/l to 34 mg/l) calculated as bound SO2.

A word from our expert 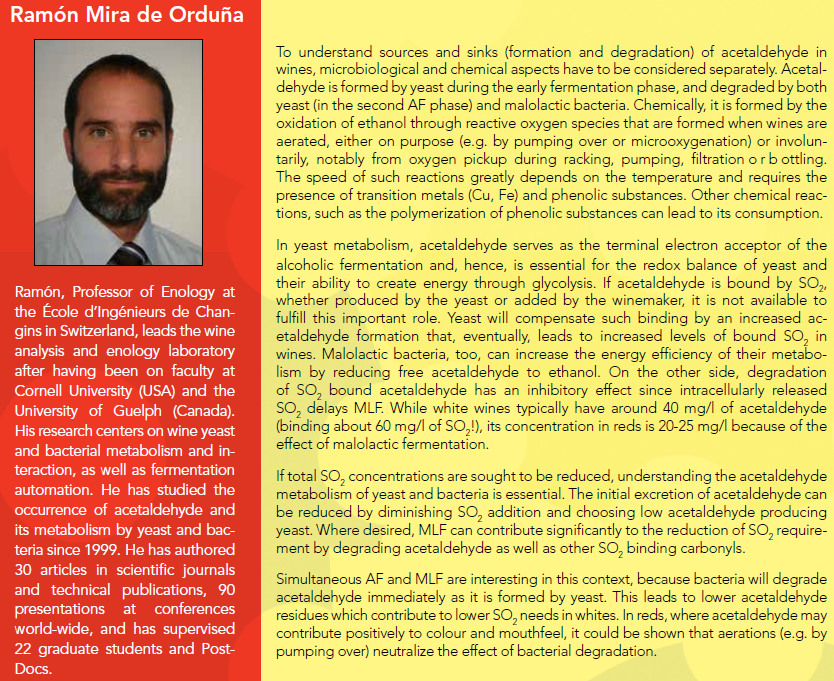