What are the factors leading to a stuck fermentation ?

Saccharomyces cerevisiae is a glucophilic yeast, preferring glucose to fructose. Some yeast are more fructophilic than others. During fermentation, glucose is consumed at a higher rate than fructose, and the proportion of fructose increases as fermentation progresses. This can lead to imbalances in the wines, and under the stressful conditions found at the end of fermentation, make it more difficult for wine yeast to utilize this non-preferred sugar.

Nitrogen is the most important yeast nutrient and has a significant impact on wine fermentation. It influences both fermentation kinetics and wine profile (Agenbach, 1977; Bezenger and Navarro, 1987). The minimum quantity of YAN in must is 150 to 200 mg/L and lower levels are considered as nitrogen deficient. When the must is deficient in nitrogen, it will limit the yeast growth and fermentation speed (Bely et al., 1990). YAN content has the most influence on the fermentation speed; it impacts the yeast biomass at the beginning of fermentation, as well as the sugar transport kinetics during fermentation.

Lack of oxygen and the role of sterols

Oxygen plays an essential role in alcoholic fermentation helping the development of an adequate yeast population and maintaining their vitality. Oxygen is required for the synthesis of survival factors such as sterols and unsaturated fatty acids (Kirsop, 1973; Kirsop, 1978; Alexandre et al., 1994; Fornairon-Bonnefond et al., 2002), which are components of the yeast cell membrane. They play a key role on the membrane structure helping to maintain the membrane fluidity, cell integrity and viability.

Proper yeast rehydration is key in a successful alcoholic fermentation (AF) as it is a crucial phase for the survival and efficiency of the wine yeast. If the yeast is not properly rehydrated, more than half of the yeasts population can die. It is very important that manufacturer’s instructions be followed particularly with respect to the dosage (Figure 2), the medium and temperature used for rehydration. During yeast rehydration, the active dry yeast will absorb water and recover their original form. The organs inside the cell continue rehydrating and a part of them disperse in the rehydration water. This loss can represent between 20-30 % of the dry weight of the yeast and can result in a micronutrient deficit. 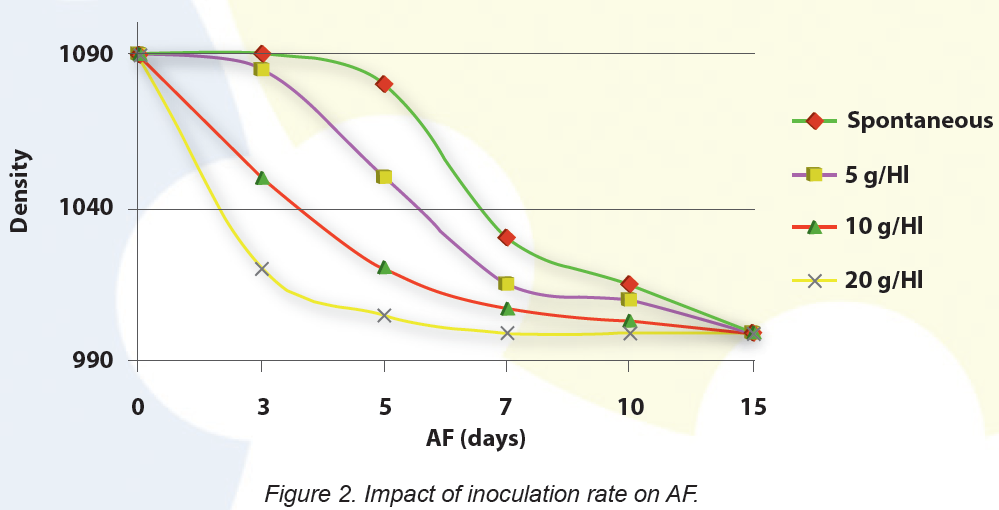 Temperature will affect AF when it is the extreme, either too low or too high, since it has been shown that ethanol toxicity increases at extreme temperature. The yeast cell membrane is weakened and eventually it leads to cell death.

Grape must composition may have inhibiting toxic compounds that affect yeast viability and fermentative activity, and that are responsible for sluggish or stuck alcoholic fermentation. Inhibiting toxic compounds, such as short and medium chain fatty acids (SMCFA) have been widely described for their inhibition of alcoholic fermentation. Pesticide residues (fongicide, herbicide, insecticide) can also seriously affect yeast viability and compromise the end of fermentation. Recent studies also showed that they can negatively impact the production of aromas (namely esters) and the wines fruit character (Noguerol-Pato et al., 2014).

Nutritional imbalance is different than nitrogen deficiency, as having lower YAN levels is a factor that in itself, does not explain everything. Indeed, well-balance nutrition (including minerals, vitamins, sterols, organic nitrogen) is the optimal key to assure yeast viability as well as optimize the yeast aroma biosynthesis and release. New results (Blondin et al. 2016 in press) have shown that even if the YAN is high, starvation of oleic acid, ergosterol, and panthothenate as well nicotinic acid, will lead to loss in viability for the yeast and eventually death resulting in and stuck fermentation and overproduction of H2S. When choosing a nutrient, quality is as important as quantity since only organic nutrients will provide those optimal growth factors as well as nitrogen and have a better nutritional balance than with only chemical DAP.

Vitamins are organic compounds essential for the optimum growth of yeasts cells and for their capacity to survive under stressful conditions. The majority act as enzymatic cofactors. They can also intervene in energy transfers or in supporting membrane integrity.

How to cure a sluggish or stuck fermentation ?

Yeast cells have the extraordinary capacity to adapt to different stress factors in a difficult environment of the grape must (high sugar, low pH, gradual ethanol increase, nutrient depletion, competition with other microorganisms, etc). However, the difficult conditions can prevail and the result is a fermentation that won’t finish, and one must take necessary actions to cure a stuck fermentation: the density is not decreasing anymore, or very slowly, and some off-aromas might be creeping up. Quick actions are necessary to avoid microbial spoilage, the apparition of wine faults (H2S, Brett odors, VA, etc) and get the fermentation going again. A reliable protocol that can be applied quickly and efficiently can help handle the different causes of AF problems.

Grape must may contain toxic compounds that inhibit fermentation such as short and medium chain fatty acids (SMCFA) and pesticides.. A new generation of yeast hull products with good absorption capacity and an affinity for these types of compounds are now available. Trials have shown that with those yeast hulls such as RESKUE™ favor complete and steady fermentations thanks to the removal of SMCFA and pesticide residues (Figure 4). 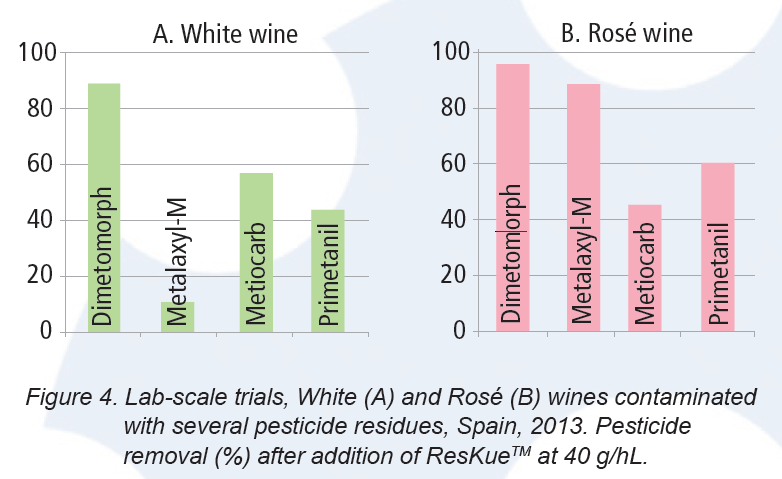 When fermentation stops mid-stream, the must generally contains much more fructose than glucose, the form of sugar that yeast prefer. To overcome this glucose/fructose imbalance, it is important to choose a yeast that has a strong affinity for fructose such as Uvaferm 43™, which is more capable of fermenting fructose and has a very high fermentation capacity and has a high alcohol tolerance.

Lallemand R&D with our premium knowledge of yeast growth and metabolism, developed a production process that makes the yeast cells more resistant to stress conditions caused by high alcohol content. Uvaferm 43™ was then optimized and pre-acclimated during multiplication with specific micronutrients and survival factor protection. This survival factors include specific sterols and polyunsaturated fatty acids that strengthen the yeast membrane. The yeast cells are then more robust, with a lower mortality rate after inoculation, and require less time to acclimate to the must. This simplifies the process of restarting your fermentation with only a few steps with the new Uvaferm 43 Restart™.

In trials done with Uvaferm 43 Restart™, it was shown that an average of one week was gained when restarting a stuck ferment as illustrated in Figure 5 in a Primitivo from Puglia in Italy.

Right at the beginning of fermentation, vitamins, minerals and available nitrogen are consumed very quickly. This can cause sluggish and stuck fermentation as indicated above. It is then key to add nutrients naturally rich in these elements such as Fermaid O™ to feed the yeasts when restarting a stuck fermentation. Fermaid O™ or Nutrient Vit Nature™ (when added at 1/3 sugar depletion) supplies critical nutrients to help the yeast avoid stressed conditions. It is one of the best nutrients available for wine yeast as it only contains organic nitrogen and all the essential elements for the yeast to complete AF. 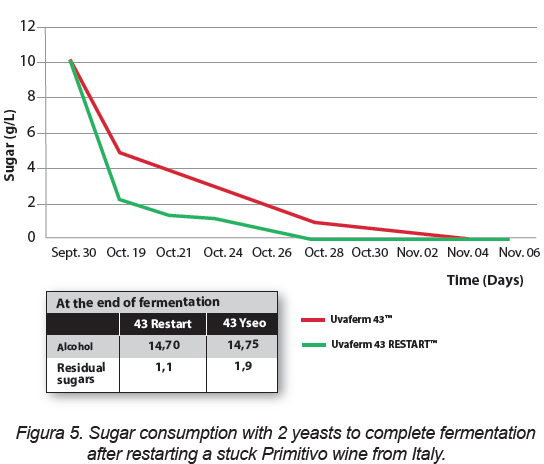 When restarting a stuck fermentation, even with a clean must/wine, the proper yeast and equipped with the best nutrients, we now understand that using an efficient protocol will secure the process. With the help of the experts at Inter-Rhône (France), a protocol was validated to make it simple, fast and efficient.