Since 1895 California has seen an increase in average temperature of nearly 2.2 degrees Fahrenheit, according to the last Napa Vintage Report. Furthermore, 2017 may be the warmest year on record that was not influenced by an El Niño weather pattern, and according to Professor Gregory V. Jones, 2018 looks like it will be another warm year.

The 2017 Napa Vintage Report kicked off with Gregory V. Jones PhD., Director of Wine Education and professor and research climatologist in the Department of Environmental Studies at Linfield College, presenting on the state of the North American climate.

According to the observations, the vintage was marked by 2017 being the warmest year on record that was not influenced by an El Niño weather pattern.

The 2017 vintage began with well above average rainfall and snow accumulation in California, and was the 20th wettest year in the 123 year record.  As a result, California saw its lowest drought conditions in the past 18 years.

The cool conditions brought by the “La Niña” weather pattern lingered into the late spring, before a dominant ridge set in off the coast into the summer, bringing extreme heat events in the months of June, August, and September.

As of 2018, California and the entire west coast is currently observing a rather “resilient” ridge that produced a very dry December, leading to our current low rainfall and snow accumulation numbers going into the 2018 season.  Currently, the snow-water equivalent values in the mountain regions of the western United States are down nearly everywhere except for the Northern Rockies.

Although much of California transitioned out of moderate/severe drought during the wet winter of the 2017 season, the current lack of snowpack in early 2018 could pull the state back into drought conditions.

Current models are favoring a slightly cooler and drier than normal start to 2018 from February to April for Northern California, with a warming trend moving South. Drought conditions are likely to develop and continue for regions of southern California.

One thing to keep in mind for the Northern California grape growing regions: the chance of frost tends to be increased with this type of cool spring weather outlook. 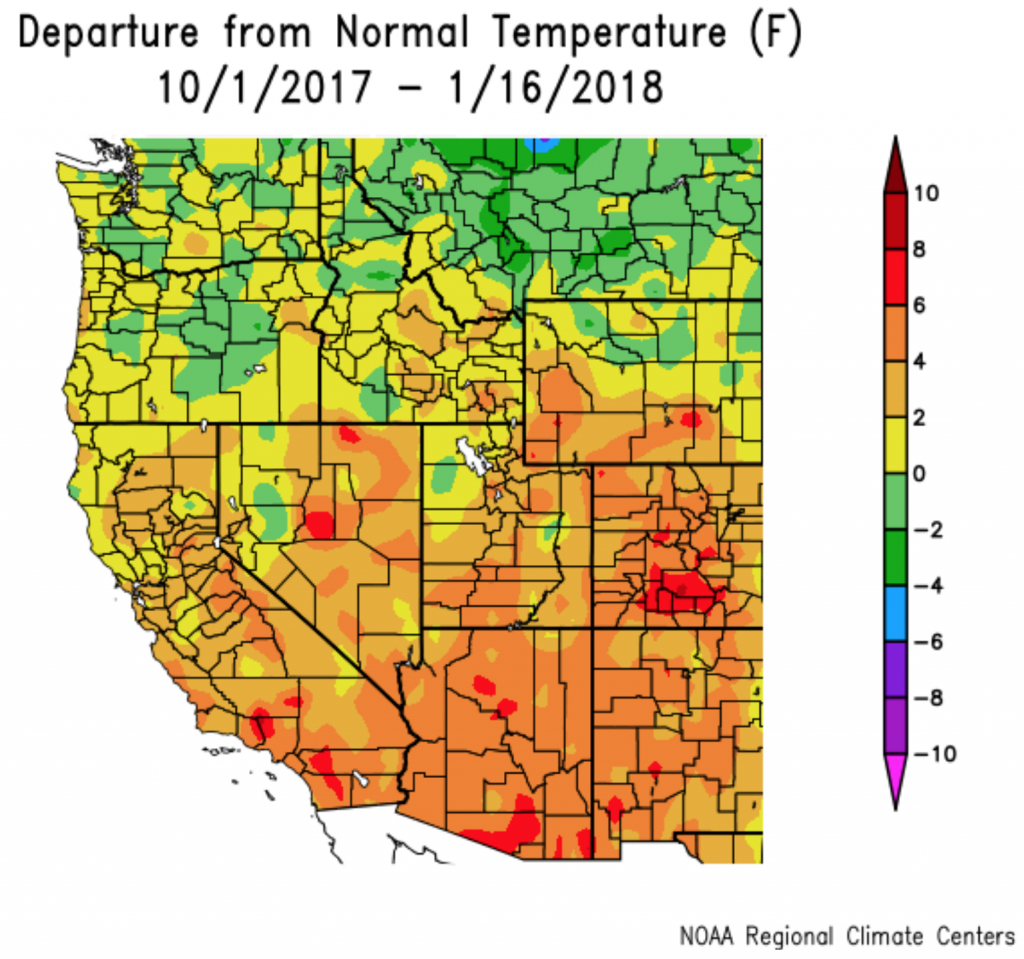 Read here the original article :  2017 Climatic Conditions in Napa, and What We Can Prepare for in 2018

What was your perception of the 2017 climate in Napa and what do you think will happen in 2018? Let’s discuss it in the comments section.

On top of discussing the climate, you can also look at a previous article regarding methodology to study vineyard microclimate currently used in many Napa vineyards.