Chemical inputs decrease and global warming (pH increase) are leading to less protected wines/musts. Contaminants, such as Brettanomyces, could thus be an issue and the use of selected wine bacteria can be a naturel alternative.

The contaminating yeast Brettanomyces is considered undesirable in wine notably for red wines. This yeast is very opportunistic and can survive and multiply in difficult conditions throughout the life of the wine. This is how Lallemand optimized biocontrol with their high quality wine bacteria.

Hygienic conditions and microbiological controls can inhibit its growth, but will not eliminate it. The goal then is to limit its development, which will in turn limit the production of volatile phenols. The use of SO2 is the usual method to control its development. However there is a recent trend to reduce the use of SO2 in wine, as well as a general increase in wine pH, which reduces its efficacy. Moreover, there is a great variability in the resistance of SO2 among different Brettanomyces strains. The inoculation with Lallemand selected bacteria is a good option to protect the wine during the fermentation process. New studies also show their potential to protect wine during the ageing steps against Brettanomyces re-contamination.

Previous studies have shown the clear impact of early inoculation of selected wine bacteria on the reduction in final volatile phenols levels. In 2014, the OIV recognized that co-inoculation of selected lactic bacteria could help to reduce the phase between alcoholic fermentation (AF) and malolactic fermentation (MLF) and consequently limit the development of Brettanomyces.

Recent studies in collaboration with IFV (France) show that some selected bacteria can have a direct inhibition on Brettanomyces growth.

For various reasons, it may not be possible to co-inoculate wines. However sequential inoculation, at the end of AF, can also help reduce the risk of Brettanomyces development. A study done (no SO2 addition at the end of MLF) with IFV showed that even if the wine after AF has a high level of Brettanomyces contamination (1000 cfu/mL), the growth of our selected bacteria after AF significantly limits their development. Final levels of Brettanomyces in the presence of selected bacteria was equivalent as the initial level (between 100 to 1,000 cfu/mL), whereas in the control with spontaneous MLF, final level of Brettanomyces is much higher (100,000 cfu/mL with a peak at 1,000, 000 cfu/mL), with  notable bretty aromas. The control over the contaminants lasted for at least 2 months after the end of MLF. 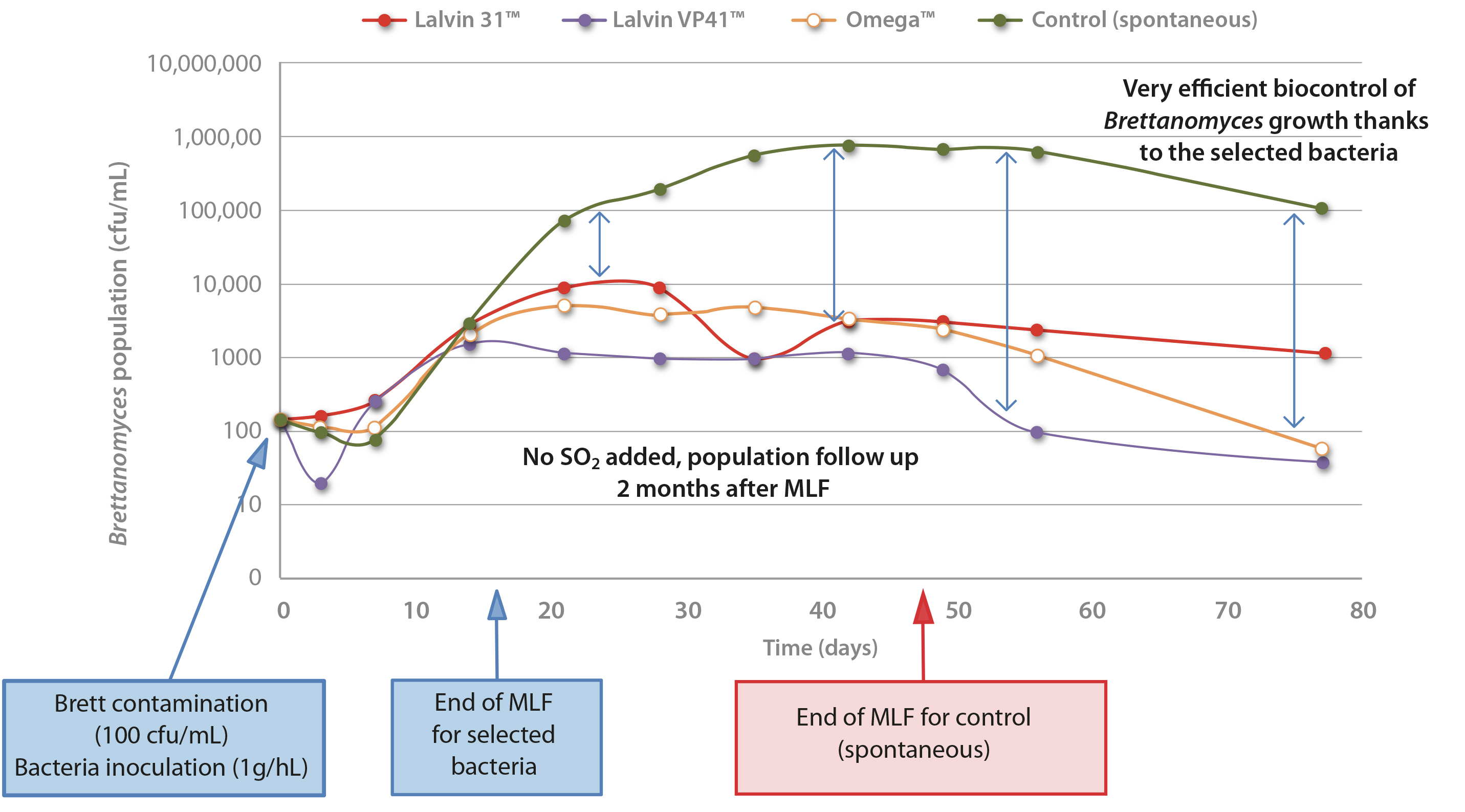 PROTECTING THE WINE AFTER MLF

Recent findings from the IFV had shown that maintaining a living population of selected wine bacteria, after MLF, can prevent Brettanomyces re-contamination. It was shown in a 2017 pinot noir wine (pH 3.5, 18°C). The wine inoculated after AF with a selected bacteria, was better protected from re-contamination by Brettanomyces compared to non-inoculated wines. If the level of contamination is low (50 cfu/mL), wine bacteria will reduce the Brettanomyces population to insignificant levels (figure 4). More than one month after the end of MLF, the volatile phenols were undetectable, whereas the uninoculated wine had volatile phenols above detection threshold. Without stabilisation, VA remains low as well ( 0.4 g/L). It was concluded that our selected bacteria remaining viable after the end of MLF has a protective action against Brett re-contamination during ageing.

To conclude, selected wine bacteria can be a natural alternatuve to reduce the use of SO2 during winemaking.