Sauvignon blanc has been one of the largest wine success stories globally since the late 20th century. This French white grape variety has been cultivated in the Loire Valley and Bordeaux regions for centuries. Yet, it became very popular on an international level once New Zealand started to grow it and produce very fruity Sauvignon blanc wines in the 1980s. It has become New Zealand's most cultivated variety and holds its success mainly to the varietal aromas of thiol compounds.

Sauvignon blanc: Unique flavors that can be recognizable at once

Oz Clarke, famous UK wine writer, in his opening address at the Congress SB 2016, explained when and how he first experienced Sauvignon blanc:

"I know when I first discovered that Sauvignon Blanc has a sense of place. It was on February 1st 1989 at 11 in the morning. On the 17th floor of New Zealand House in London. Just inside the door on the left. Third wine along. That’s the first time I tasted a Sauvignon Blanc from Marlborough in New Zealand’s South Island. That’s when Montana 1983 Sauvignon was introducing itself to the world.

My world of wine would never be the same again. There had never before been a wine that crackled and spit its flavours at you from the glass. A wine that took the whole concept of green – and expanded it, stretched it and pummelled it and gloriously re-interpreted it in a riot of gooseberry and lime zest, green apples, green pepper sliced through with an ice cold knife of steel, piles of green grass, the leaves from a blackcurrant bush, and, just in case this was all too much to take – a friendly dash of honey and the chaste kiss of a peach."

And that is indeed true that Sauvignon Blanc tastes very different to other white wines; this variety owes its success largely to the varietal aromas of thiol compounds (blackcurrant, exotic fruit, boxwood); the expression of these aromas varies depending on the terroir, vintage and growing conditions of the grapes, but also on the selected wine yeast used to ferment the must. 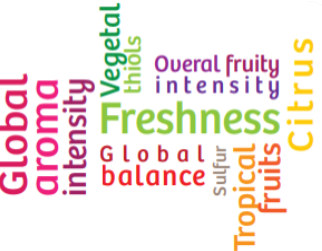 Lalvin MSB™, a pure culture of Saccharomyces cerevisiae, was specifically selected in New Zealand, in the Malbourough Valley, during a project lead by the Lallemand R&D team, from several isolates sampled in 5 different wineries, for its fermentation performance and ability to enhance Sauvignon blanc varietal characters.

This yeast enables a steady fermentation, has medium nitrogen demand, is a lower H2S producer, has a alcohol tolerance up to 14,5% v/v and can be used both for Sauvignon blanc or Chenin blanc grape varieties.

Also, to augment thiol precursor uptake and optimise bioconversion to volatile thiols, it is recommended to use Stimula Sauvignon blanc™ with Lalvin MSB™, as shown in the figure hereunder. 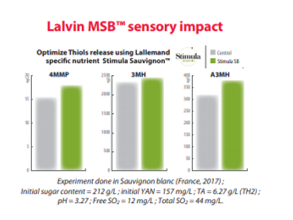