Impact of selected wine bacteria on the sensory profile of wines .

A new spanish study performed in collaboration with technical institutes investigates the effects of co-inoculation ( inoculation of wine bacteria 24 hours after yeast addition)  with two different  wine bacteria Oenococcus oeni  (PN4 and OMEGA under MBR form , from Lallemand oenology)  on the kinetics of malolactic fermentation (MLF), wine chemical composition, and organoleptic characteristics in comparison with spontaneous MLF in Tempranillo grape must from Castilla-La Mancha (Spain).

The results  of this study confirm that the correct selection of yeast and LAB strains for the performing of MLF by co-inoculation has a positive influence in the reduction of fermentation times and volatile acidity production, but also in the aromatic composition of wine. In fact, it was clearly proved the considerable effect of co-inoculation of the commercial yeast with two different LAB strains on the organoleptic properties of Tempranillo wines obtained, when compared with those obtained by spontaneous MLF.

Volatile Compound Analysis
Aromatic profiles from the three different wines schow that  Metabolism of the yeast Viacell C-58® and the two different lactic acid bacteria decisively influenced the volatile composition of wine, including secondary aromas related to MLF. It is appreciated that esters and alcohols were significantly higher, and fatty acid content was lower in wines made by co-inoculation with commercial LAB strains compares to that made by spontaneous MLF, used as a control.
Ethyl acetate content was significantly different between the three fermentation strategies (Table 2). Fermentations carried out with the O. oeni OmegaTM strain showed a higher isoamyl acetate and hexyl acetate content, which are remarkable compounds in Tempranillo wines when compared to the other two wines. The lower content of 2-phenyl acetate was lower in the wine co-inoculated with the O. oeni PN4TM strain (Table 2). Regarding the ethyl lactate, the LAB strain OmegaTM contributed to lower levels of lactic aromas, while the isoamyl acetate concentration was higher (Table 2).
Ethyl hexanoate is responsible for the fruity notes in red wines, and it was observed that its content was significantly higher in those wines made with O. oeni PN4TM and OmegaTM, if compared to spontaneous MLF (Table 2). The same happened with 1-hexanol, which contributed to herbaceous notes (Table 2). It should also be emphasized that ethyl butyrate was significantly higher in wines made with OmegaTM (Table 2). No significant differences in the ethyl octanoate and ethyl decanoate contents were found between the three wine trials (Table 2).
Carboxylic acids are responsible for fatty, rancid, and buttery notes (Table 2). It was shown that co-inoculated wines had lower levels of hexanoic acid, octanoic acid, and decanoic acid with respect to the spontaneous MLF, highlighting that O. oeni PN4TM notably reduced butyric acid and hexanoic acid content.
Taking into account that acetaldehyde content decreased during MLF, a decline was observed in wines with spontaneous MLF, in contrast with LAB co-inoculated wines, where PN4TM showed the highest level of the compound. The 2,3-butanodione is a decisive compound in MLF, since it is mainly derived from lactic acid bacteria metabolism. High concentrations of this metabolite give heavy milky notes. Therefore, it is interesting to obtain it in low concentrations, as it will contribute to wine smoothness. High quantities of this compound were produced in spontaneous MLF wine in contrast to the co-inoculated ones. This fact can be very promising for wines produced by co-inoculation of commercial LAB since they have less lactic notes (octanoic and decanoic acid, 2,3-butanodione), which avoids the masking of fruity notes that give personality to Tempranillo wines made with the co-inoculation of O. oeni PN4TM and OmegaTM strains.

Sensory Analysis
Regarding the sensory profile of wines and according to the tasters, differences in organoleptic properties were observed.Wines made by spontaneous MLF showed higher aromas of raisins, milky aromas, and color intensity. In contrast, wines developed by the inoculation of commercial lactic acid bacteria highlighted the fresh aroma and lengthy finish flavor and ripe red fruit character and less milky aromas.

Panelists concluded that wines fermented with LAB reached more fruity and floral flavors, and spontaneous wines were less fruity and had stronger astringency and milky, raisin flavors. LAB Omega™ had strongly fruity and floral aromas, and PN4 in spices and fresh aromas in the Tempranillo wines. Spontaneous LAB produced the least ripe red fruit, floral, spices, and fresh aromas wines in this comparison. These wines tended to have milky, raisin, and astringent flavors. Statistical analysis revealed that the descriptors that the descriptors differed significantly in non-inoculated Tempranillo wines from those ones, which were inoculated,) suggesting that the different LAB strains deeply affected the flavor compounds of the wines 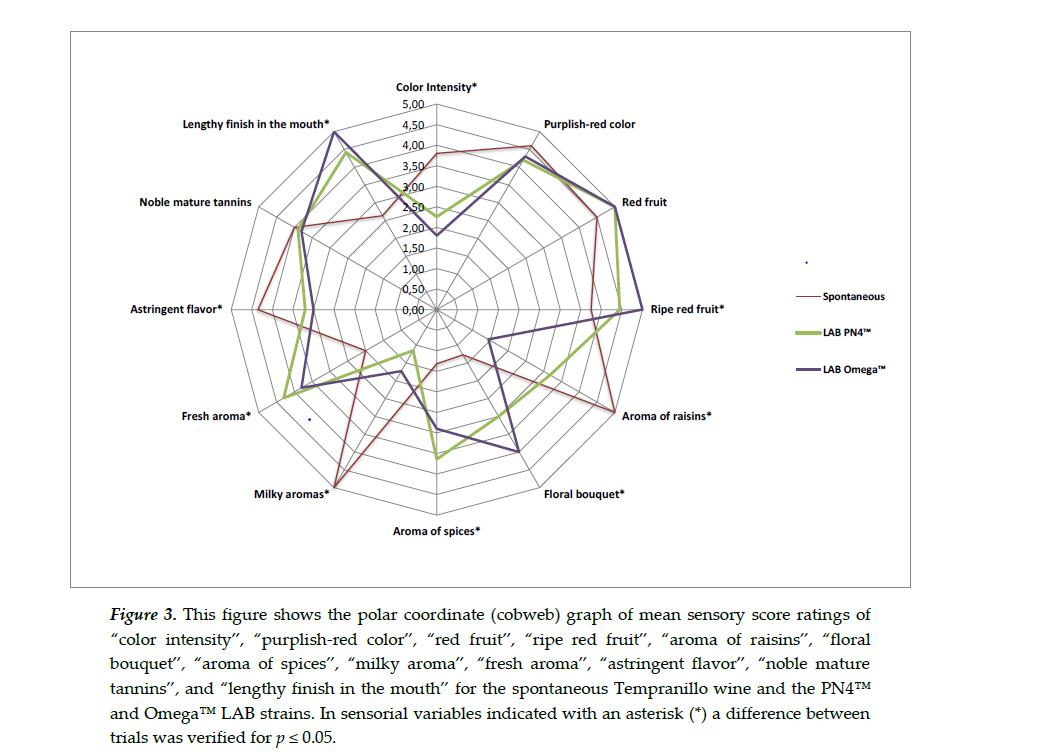 title of the article Co-existence of Inoculated Yeast and Lactic Acid Bacteria and Their Impact on the Aroma Profile and Sensory Traits of Tempranillo Red Wine. You can download it there : https://www.mdpi.com/2311-5637/6/1/17 . This study has been performed by  Instituto Regional de Investigación y Desarrollo Agroalimentario y Forestal de Castilla-La Mancha (IRIAF), IVICAM, Parque Científico y Tecnológico de Castilla-La Mancha,  Department of Biomedicine, Biotechnology and Public Health-