The fermentation of fructose in wine making

Glucose and fructose are the main fermentable sugars in wine must. During alcoholic fermentation, wine yeasts convert most of the glucose and fructose present into alcohol and CO2. Selected yeasts differ in their capacity to consume fructose and can have an important impact on the fermentation performance, especially under difficult conditions. The fructophilic index of wine yeast appears as a good indicator of performance in potentially problematic fermentation conditions.

Fructose is a 6-carbon polyhydroxyketone. It is an isomer of glucose; i.e., both have the same molecular formula (C6H12O6) but they differ structurally. It is one of the sugars consumed by yeast during wine fermentation.

Why is it important in wine making ?

Saccharomyces cerevisiae is a glucophilic yeast, preferring glucose to fructose. During fermentation, glucose is consumed at a higher rate than fructose, and the proportion of fructose increases as fermentation progresses. This can lead to imbalances in the wines, and under the stressful conditions found at the end of fermentation, make it more difficult for wine yeast to utilize this non-preferred sugar. Therefore, knowing how the fructose utilization varies in wine yeasts is important for the maintenance of a steady fermentation rate at the end of alcoholic fermentation and limit the risk of stuck fermentation.

What are the factors influencing fructose utilization during fermentation ?

During alcoholic fermentation, sugars are consumed mainly during the stationary phase. During this phase, the available nitrogen gradually becomes less available, and since it is an essential nutrient involved in the transport of sugars into the cell via protein synthesis, this partially explains why both the yeast metabolism and the fermentation activity (Salmon, 1996) slow down. The alcohol level also gradually increases, becoming toxic to the yeast cell, and the use of fructose is even more compromised. It is therefore recommended to have a minimum level of 150 mg/L of YAN or supplement with complex nutrition.

It has also been shown that the preference for glucose over fructose is yeast dependent, and the discrepancy between glucose and fructose consumption is not a fixed parameter, but is dependent on the yeast’s genetic background and on external conditions (Berthels et al, 2004). Research has confirmed the genes coding for the hexose transporters in yeast. Under oenological conditions, several genes are involved in sugar transport, which is regulated by a large, multi-gene family called HXT. There are 20 HXT genes. Hxt1 and Hxt7 are the main transporters. Hxt2, Hxt6 and Hxt7 are high-affinity carriers, whereas Hxt1 and Hxt3 are low-affinity carriers. Several other Hxt carriers have intermediate affinity. Both the high-and low-affinity carriers have greater affinity for glucose than fructose, which may affect the rate of utilization of those hexoses. Hexose concentrations in the medium will influence the expression of individual HXT genes (Perez et al., 2005; Guillaume et al., 2007). It has been shown that Hxt3 has the highest capacity to support fermentation (Luyten et al., 2002) and studies have also identified that this gene is indeed responsible for the capacity for consuming fructose among certain yeasts (Guillaume et al., 2007).

Fructose utilization by wine yeasts is critical for the maintenance of a steady fermentation rate at the end of alcoholic fermentation. When fructose becomes the main sugar present during the late stages of alcoholic fermentation and wine yeasts have to ferment this non-preferred sugar after long periods of starvation, it may result in sluggish or stuck fermentations (Guillaume et al, 2007) especially when the ethanol is higher and there are nutritional imbalances. In such situations, the low fructose utilization capacity of S. cerevisiae is thought to contribute to the low fermentation rate. As explained above, some wine yeasts naturally vary in their ability to use fructose. This ability is measured by the ‘fructophilic index’. The fructophilic index is described as the calculation of the area between the glucose and fructose consumption curves for the CO2 released by the same yeast, and is the criteria selected to evaluate each yeast’s capacity to consume fructose. The focus is on the area located in the last half of the fermentation since it is the critical area where the sugars are mainly consumed. The smaller the area, the closer the fructose consumption kinetics are to the glucose consumption kinetics (Dumont et al., 2009).

Under these conditions (temperature of fermentation: 24°C, synthetic medium high in YAN (MS300) and high in sugars, total sugars: 260 g/L, GFR = 1 (glucose = 130 g/L and fructose = 130 g/L), the following (figure 1) ranking is found. The most efficient fructose utilizing yeast is the Uvaferm 43® YSEO®, whereas the least efficient is found to be the Lalvin 71B® YSEO®. 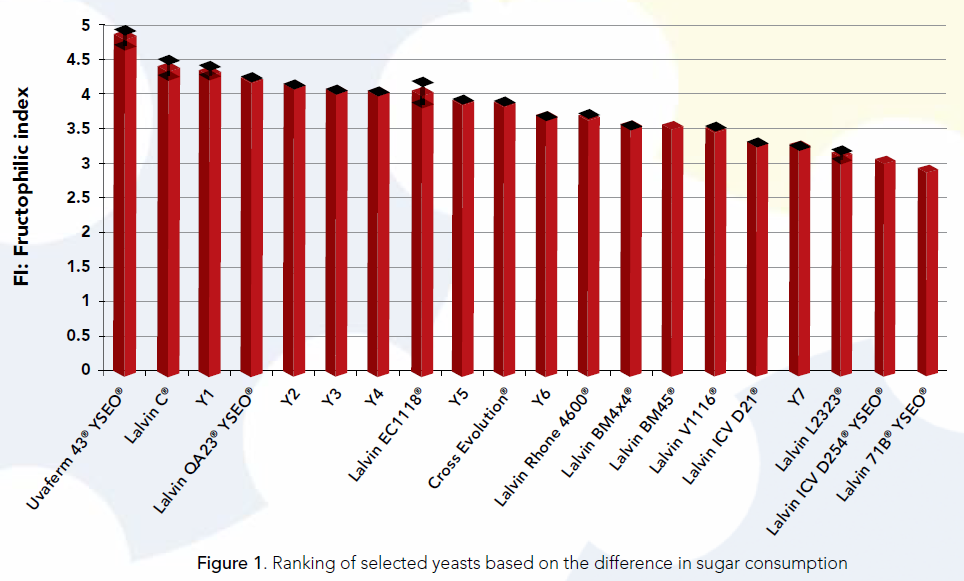 From those results, we investigated the performance of a few selected yeast under different conditions that can influence fructose utilization. Figure 2 shows the fructophilic index of selected yeast under the same conditions except that the GFR varies from 1 (optimal) to difficult (0.33) which means that the concentration of glucose in the must is lower than the fructose, forcing the yeast to use fructose. The conditions were the following: temperature of fermentation : 24°C, synthetic medium high in YAN (MS300) and high in sugars,total sugars: 260 g/L, GFR = 1 (glucose = 130 g/L and fructose = 130 g/L) or GFR = 0.33 (glucose = 65 g/L, fructose = 195 g/L). Under these conditions, Uvaferm 43® YSEO® still outperforms the other yeast, even though, under the GFR of 0.33, there is a reduction in the fructophilic index, and this applies for all the yeasts.

Under limited YAN conditions (MS70 = 100ppm YAN) fermentation times were about four times longer than under higher YAN conditions (MS300 = 400 ppm YAN). The initial levels of nitrogen influence the fermentation activity of yeasts, but do not impact their variable capacity to utilize fructose. Under both nitrogen levels, Uvaferm 43® YSEO® showed the better ability to use fructose (figure 3). 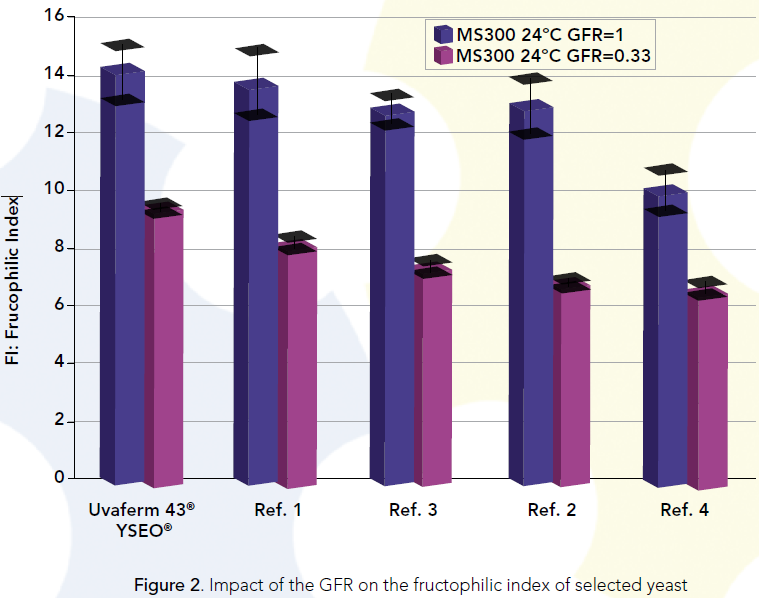