Co-inoculation is now recognized as a simple and safe practice for the management of malolactic fermentation for wine quality optimization.

Co-inoculation is the practice of inoculating selected wine bacteria at the beginning of the winemaking process shortly after yeast inoculation, usually 24 to 48 hours after yeast inoculation. This technique is advantageous because not only will it secure the malolactic fermentation (MLF), but also because there are definite advantages that are recognized by winemakers and professionals. For a successful co-inoculation, some parameters are crucial for its success – choosing the right wine yeast, correctly rehydrated, good temperature management and the proper yeast nutrition strategy are keys point to integrate for any fermentations. Well-fed and healthy wine yeast and bacteria leads to complete and regular alcoholic and malolactic fermentations Based on 20 years of experiences, and from the results of many collaborations between Lallemand and research center from France, Spain, Italie, South Africa, Argentina and Germany has shown the benefits of co-inoculation with either Oenococcus oeni or Lactobacillus plantarum.

Co-inoculation has a stronger impact on diacetyl production compared to the type of wine bacteria used. Our studies with institutes such as Neustadt and IFV and many winery trials have shown that whatever the wine bacteria used (and even with highest producer of diacetyl), co-inoculation always result in more fruit-driven wines styles and very low diacetyl content in wines. Early results also show that in the case of co-inoculation the high content of sugars could repress the metabolism of the diacetyl, as opposed in post-alcoholic fermentation inoculation. And under the reductive conditions generate by the active yeast, diacetyl produced will be immediately reduced to the less active metabolites, acetoin and butanediol. 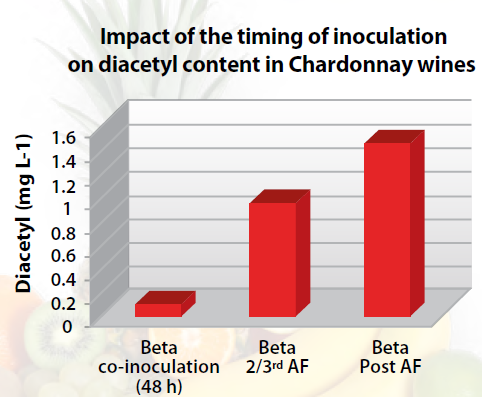 MLF can be completed in between 3 days to 2 weeks depending on the type of musts and the bacteria used. 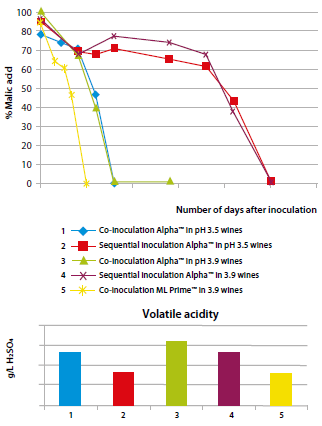 Co-inoculation to limit the development of Brettanomyces and off-flavors

The increase in sugar levels, pH and sometimes lower SO2 addition can influence the development of spoilage microorganisms, especially Brettanomyces which can produce phenolic off-odors in wines.

It is well known that the period from the end of AF to the start of MLF is particularly conducive to the development of Brettanomyces. 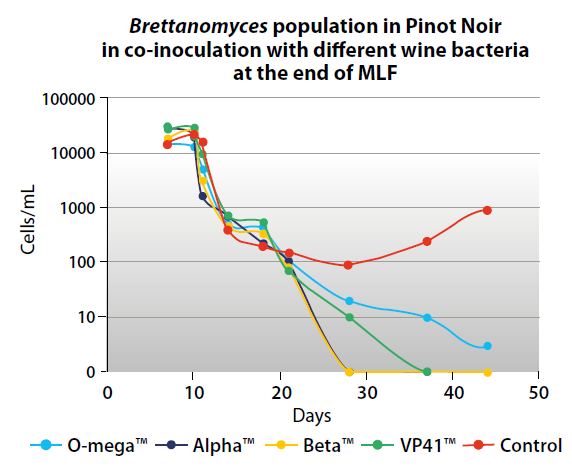 Influence of Inoculation with Malolactic Bacteria on Volatile Phenols in Wines

Co-inoculation is recognized as a secure and safe practice with our Oenococcus oeni cultures (VP41™, BETA™, ALPHA™, PN4™, OMEGA™,...) for the different wines conditions.

As a bio-control agent for low acidity /high pH wines, ML Prime™ Lactobacillus plantarum is ideal as it completes MLF in 3-5 days during the AF with no risk of increased VA due to its specific metabolism. It enables early stabilization of wines , as soon as the AF is finished. 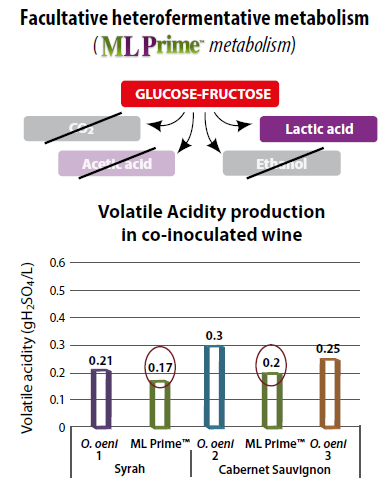