The tendency to harvest higher maturity grapes, resulting in higher pH and alcohol wines, seems more favorable to the development of indigenous bacteria. To limit the development of unknown indigenous flora, which can lead to the production of undesirable sensory deviations, co-inoculation is an interesting winemaking option. Using selected Lb. plantarum in the freeze-dried form for direct inoculation appears to be a very safe winemaking option in combination with the co-inoculation strategy.

Malolactic fermentation (MLF) can occur during or after alcoholic fermentation and is carried out by one or more species of lactic acid bacteria (LAB). Four genera were identified as the principal organisms involved in MLF: Lactobacillus, Leuconostoc, Oenococcus and Pediococcus (du Toit et al., 2011). Oenococcus oeni is the predominant species, and a well-known, effective microorganisms for overcoming difficult wine conditions. It is available in the form of starter cultures that nowadays are very reliable. A few Lactobacillus spp. have also shown that they can perform very efficiently in winemaking conditions and that they possess many favorable characteristics for MLF, especially in high pH wines, as was demonstrated in the patented application (EP1631657). This edition of the Winemaking Update presents the latest findings on the use of Lactobacillus plantarum, based on new concepts for achieving MLF and for limiting the growth of indigenous flora and possible harmful wine microbes.

Wine pH has been increasing gradually for the last several years. Red wines with pHs over 3.5–3.6 are more and more frequent. At those pH levels, we can observe very fast growth of various indigenous microorganisms, some of which are spoilage bacteria that can cause loss of wine quality. The pH of the wine determines which species of LAB are present. Values above pH 3.5 favor the growth of Lactobacillus and Pediococcus spp., whereas O. oeni tends to dominate at lower pH values (Henick-Kling 1993).

Some selected L. plantarum strains (Fig.1) have shown interesting results for their capacity to induce MLF under high pH conditions, and unlike Oenococcus oeni, L. plantarum has a facultative heterofermentative metabolism that prevents acetic acid production from hexose sugars. Strains within this species can also have a more complex enzymatic pool that can have a very positive impact on the fruity sensory profile of wines. The selection of a “good” oenological Lactobacillus plantarum is not easy. As early as 1988, L. plantarum were selected with mixed success. Since 2005 however, some L.plantarum isolated at University Catolica del Sacro Cuore in Italy resulted in a very effective L. plantarum, adapted to high pH wines. The new starter culture, called ML Prime™, is a pure Lactobacillus with a facultative heterofementative metabolism. It converts glucose or fructose only to lactic acid, but not into acetic acid, therefore avoiding increased production of volatile acidity during MLF. Due to its specific optimized production process, ML Prime™ expresses very high malolactic enzymatic activity on musts, resulting in a fast MLF during alcoholic fermentation and in wines with interesting oenological characteristics. 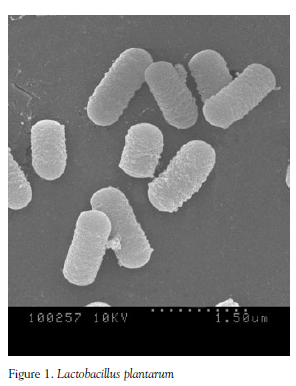 A fast and reliable MLF in high pH wines

The winemaker’s main concern when initiating malolactic fermentation is its timely completion with positive impact on the wine and lower volatile acidity. Co-inoculation is one way to achieve these goals without risk. It allows the winemaker to control MLF because the selected bacteria compete more effectively against indigenous flora. Although, some winemakers still consider co-inoculation with Oenococcus oeni to be risky because of its obligatory hetero-fermentative metabolism, ML Prime™ is a very safe option for winemakers because there is no risk of volatile acidity from hexose sugars during MLF.

ML Prime™ has been studied extensively in order to guarantee a fast, secure MLF that takes 3 to 15 days, depending on the conditions. Due to its very great vitality and high concentration, the lag phase is very short. This allows it to quickly dominate the indigenous flora, leading to more rapid onset of MLF.

For example, a trial conducted on a Grenache (Spain, 2014), in a must at pH 3.7, with an alcohol potential of 14% and initial malic content of 2g/L, compared L. plantarum ML Prime™ to two different strains of O. oeni in co-inoculation and spontaneous MLF. L. plantarum ML Prime™ completed the MLF in three days after inoculation, versus one week with O.oeni used in co-inoculation. Spontaneous fermentation took longer than 12 days. Furthermore, VA production remained very low in all cases (Figure 2) except for the spontaneous fermentation. 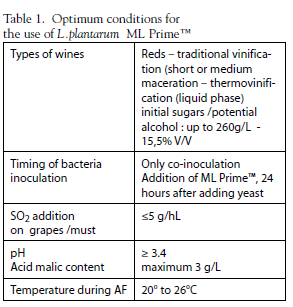 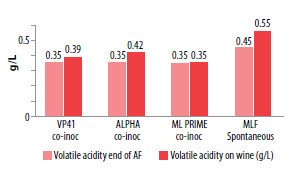 Studies were carried out to determine the best procedures and conditions in which ML Prime™ could perform successfully. Temperature, pH, SO2 concentration, inoculation, timing of additions, initial malic acid content and sugar/alcohol concentrations were studied with this bacteria.

The best conditions for successful MLF with Lactobacillus plantarum ML Prime™ were established as described in Table 1.

Control Microbial contamination under the care of ML Prime™

Because of the high initial vitality of L.plantarum ML Prime™ an immediate onset of malolactic fermentation can be observed and malic acid is degraded during alcoholic fermentation.. In Figure 3, the Syrah from Languedoc (INRA, Pech Rouge 2014) was fermented at two different pHs (3.5 and 3.9) where typical microbial contamination is a risk, and the ML Prime™ completed the MLF in 9 days at both pHs. This way, wines can be stabilized early and protected from further contamination and thus retain their sensory integrity. It is important to note that the final VA in those wines did not increase during MLF, but remained at 0.17 g/L.

The trials where implantation controls had been applied, showed that L. plantarum ML Prime™ achieved 100% implantation in the must during co-inoculation, and consequently the indigenous contaminating lactic acid bacteria was under control and under the detection threshold of 2x103 cfu/mL. This allows for a more stable wine, where the risk of spoilage contaminants such as acetic acid bacteria and also undesirable strict hetero-fermentative Lactobacillus strains or Pediococcus is greatly reduced.

Strong dominance by ML Prime™ is a good way to suppress the growth of undesirable indigenous bacteria. It is well-known that these spoilage bacteria can develop negative metabolites which affect the quality of the wines, either directly by producing bad aromas (mousy taste, volatile phenols, volatile acidity) or masking the fruity characters of the wines due to the production of compounds as biogenic amines and diacetyl or acetaldehyde. Since ML Prime™ is also “phenol negative,” it does not possess the cinnamyl esterase enzyme and cannot produce precursors for volatile phenol production by Brettanomyces bruxellensis.

The tendency to harvest higher maturity grapes, resulting in higher pH and alcohol wines, seems more favorable to the development of indigenous bacteria. To limit the development of unknown indigenous flora, which can lead to the production of undesirable sensory deviations, co-inoculation is an interesting winemaking option and using selected Lb. plantarum in the freeze-dried form for direct inoculation appears to be a very safe winemaking option in combination with the co-inoculation strategy. L. plantarum ML Prime™ offers several advantages: good implantation, fast, effective dominance in co-inoculation and very fast, complete MLF under high pH conditions. In addition, its facultative heterofermentative characteristics makes ML Prime™ a safe choice for preventing the formation of acetic acid (volatile acidity) from hexose sugars.