How to control the formation of Biogenic Amines with selected wine bacteria?

Wine buyers, consumers and importers are increasingly concerned with the biogenic amines level in wine.
Selected wine bacteria, as well as Bactiless™ are the most efficient and natural solutions to prevent the production of biogenic amines.

What are biogenic Amines?

What are the impacts of biogenic amines in wines?

The presence of biogenic amines (BA) in wine is becoming increasingly important to consumers and producers alike, due to the potential  of allergic reaction, toxicity to humans and consequent trade Implications. Generally, the levels of histamine in wine are not enough to cause problems with most individuals. Some people, however, may be unable to adequately metabolize even low levels of histamine.

Biogenic amines may cause a reduction in overall wine aroma, resulting in wines that have lost varietal character. Research conducted at the Universidad de La Rioja, Spain (Palacios et al., 2004), where putrescine and cadaverine were added to red wine showed that descriptors such as rotten fruit, rancid and dirty were used to describe the overall flavour impact.

What are the legal limits for biogenic amines?

Some countries have recommended upper limits of histamine in wine (Costantini et al., 2019; Smit et al., 2008). The OIV advocates the use of viticultural and winemaking practices that reduce the risk of elevated histamine concentrations in grapes and wine.

Where do biogenic amines originate from?

Also, in the context of global warming, higher musts pH, low SO2 strategies, water stress in the vineyards are all conditions promoting the development of spoilage microorganisms that produce BA. There is a resurgence of high contents of BA in wines and it could result in demands to limit their content more severely.

How to control biogenic amine production in wine?

Different strategies can be used to reduce biogenic amines in the wine. SO2 addition or the use of Bactiless™ (OIV approved natural chitosan based  product from Aspergillus niger) can help reduce the number of indigenous LAB producing biogenic amines, often found in high numbers in high pH must. Proper management of MLF is critical to controlling biogenic amines. This can be achieved by complete and thorough cellar sanitation, good wine pH management, wine stabilization with sulfur dioxide, and inoculation with only known, selected and characterized wine LAB strains.

Co-inoculation with our selected wine bacteria not able to produce biogenic amines to perform MLF is beneficial to minimize the risk of indigenous microflora growth and over-production of biogenic amines.

Co-inoculation also ensures that the wine can be stabilized quickly and will also reduce the risk of production of BA during the steps prior to bottling. Moreover, as malolactic bacteria are compatible with organic winemaking, they are even more important in order to control the levels of BA in those wines. 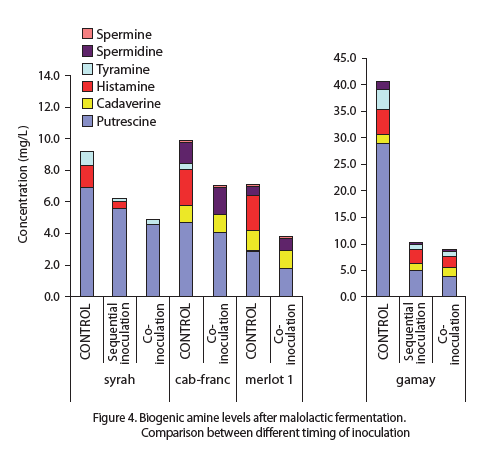 Biogenic amines are found in fermented food and beverages, including wine. Of the many biogenic amines, histamine, tyramine and putrescine are the most important in wine. It is the metabolism of amino acids by lactic acid bacteria that produce the biogenic amines found in wine. Red wines tend to have higher biogenic amines content than white wines, as this wine type all undergo the bacteria driven malolactic fermentation.

Good winemaking practices should be used to avoid the production of biogenic amines; management of must and wine pH to minimize the proliferation of native microflora, stabilize musts or wines for antimicrobial protection with SO2 or new biological solutions (such as Bactiless™) and use malolactic bacteria strains (and particularly in co-inoculation) that have been screened for the absence of biogenic amine genes.

Compatible with organic winemaking or in a strategy to reduce chemical additions, the use of selected malolactic bacteria is a key step to achieve wines with low to no biogenic amines.

You want to know more about the mechanisms of formation of biogenic amines and conditions that influence their concentrations in wines?