GLUTASTAR™ - The king of natural antioxidants

Protection of rosé and white musts against oxidation at the earliest stage of the winemaking process is key to prevent browing and loss of aromas in wine. The addition of inactivated dry yeasts (IDY) containing glutathione is now well known from the winemakers as a tool to limit oxidation phenomena in musts and wines. GLUTASTAR™ is a new specific inactivated yeast with guaranteed glutathione level offering more benefits to the wine than protection against oxidation only.

Glutathione: how is it produced and what role does it play in winemaking?

Glutathione (L-g-glutamyl-L-cysteinyl-glycine) is a tripeptide which contains three constitutive amino acids: glutamate, cysteine and glycine. It comes from the natural metabolism of Saccharomyces cerevisiae or non-Saccharomyces yeasts.

In must, wine or even yeast, glutathione can be found under its reduced (GSH) or oxidized form (GSSG).

Glutathione is important in wine under its reduced form - GSH because it has the ability to scavenge orthoquinones, main protagonists of color browning and aroma loss due to oxidation mechanisms. It has been known for years that GSH is a more potent anti-oxidant than ascorbic acid.

Labelling rules and other specifications

The OIV recently defined and adopted the Monography 2018 (i.e. the specificities of the product) with precise labelling rules and other specifications the product needs to comply with to be authorized on the market, mainly targeting the composition of the final product and the way it is produced.

Also, the inactivated yeast with guaranteed glutathione levels must comply with other specifications:

Since 2003, Lallemand Oenology has designed and optimized its own IDY production process, using a selected pure culture of specific Saccharomyces cerevisiae yeast and submitting it to specific culture conditions (temperature, medium composition (pH, amino-acids, sugar,…)) with the aim to optimize the glutathione biosynthesis and accumulation into the intracellular medium.

The production process ends up with a biomass of yeast rich in reduced glutathione, that must comply with the new OIV specifications, as specified here above. When the yeast has reached its optimal development, it undergoes a heat and/or pH treatment to be inactivated, then it is dried, stored and packaged.

GLUTASTAR™ is a new natural SPECIFIC INACTIVATED YEAST WITH GUARANTEED GLUTATHIONE LEVEL, dedicated to the protection of white and rosé wines against oxidation.

Added to the grapes or the must at the earliest stage in winemaking process, before the fermentation, the unique properties of GLUTASTAR™ confer to the wine an efficient protection against browning and aroma oxidation, a better aromatic expression, freshness, and a longer preservation of thiols and esters.

The addition of GLUTASTAR™ contributes not only to enhance aromatic intensity and persistency thanks to the release of a high level of stabilizing peptides, but also to increase mouthfeel perception and wine thickness due to the polysaccharides enrichment, both in white and rosé wines.

GLUTASTAR™ is the result of a research collaboration with the Institut Universitaire de la Vigne et du Vin de Dijon, France, that evidenced its efficiency using a fine characterization via metabolomic approach. The combination of the original yeast strain and the optimized production process ensures the ability of GLUTASTAR™ to release the highest level of reduced glutathione and stabilizing peptides exhibiting a high free radical scavenging activity.

GLUTASTAR™ and the results clearly show that the wine with GLUTASTAR™ has the most effective activity, as shown in figure 1. 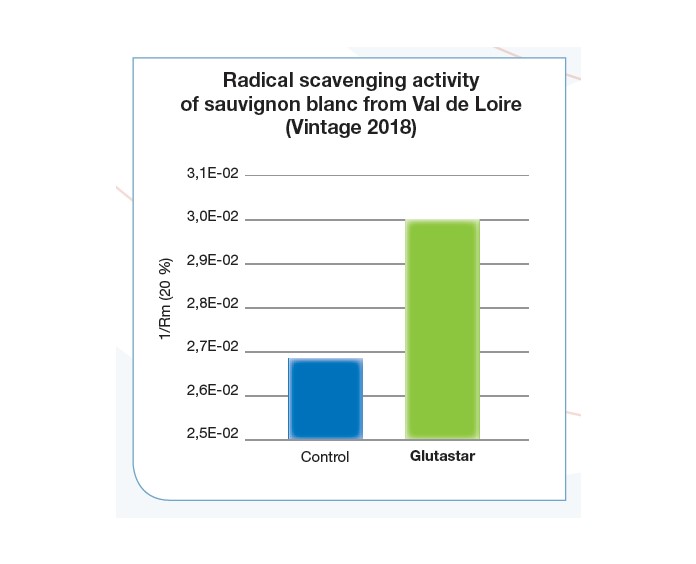 A great impact on the aromas

During a trial carried out on a Sauvignon blanc, Loire, France 2018, we compared the aroma compounds concentration of a control wine and the same wine treated with GLUTASTAR™ at 30 g/hL during the prefermentative maceration on solids (8 days at 4°C on solids then 24h of clarification at 12°C with enzyme). The figure 2 shows that the wine treated with GLUTASTAR™ had a greater concentration of the 3-mercapto-hexanol (3MH) and its acetate (3MHA) and also of the 4-mercapto-4-methylpentan-2-one (4MMP).

The highest level of reduced glutathione

In a 2018 trial conducted on a Sauvignon blanc produced in the South-Western part of France, we compared a must in which we added 30g/hL of GLUTASTAR™ just after pressing, with classical settling (24h clarification at 5°C) with a control wine. A very clear effect of GLUTASTAR™ on the reduced glutathione level in the final wine was observed, as shown in Figure 3. 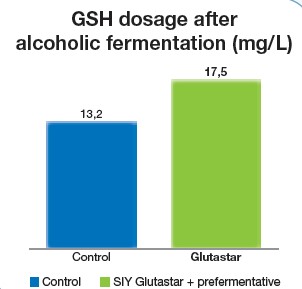 A longer preservation of color and aromas over time

We conducted a trial on a Rosé de Provence in 2018 (Syrah/Grenache) comparing the color and aromas
preservation ability over time of a wine treated right after pressing with pea protein (30 g/hL), GSH inactivated yeast (30 g/hL), GLUTASTAR™ (30 g/hL) and a control wine. The data presented in Figure 4 were observed after bottling and clearly show the efficiency of GLUTASTAR™ to protect wine color from the very beginning of the winemaking process.
This study also showed a good impact on aromas after bottling, with better candy, yellow and red fruits and spices aromas & less bitterness than in the other wines. 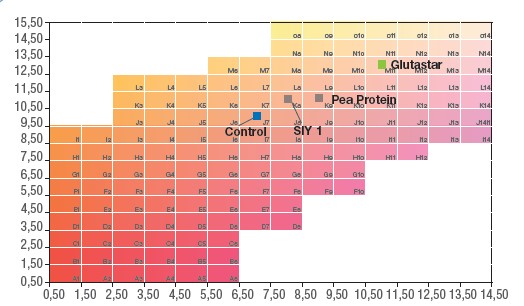