During malolactic fermentation, a variety of metabolic end products can be produced. Some of the compounds produced have pleasing sensory properties, while some do not. Therefore, the choice of wine bacteria and the timing of inoculation are critical to the wine style. Each wine bacteria will impact differently on the final wine sensory profile.

Concomitant to the metabolism of Oenococcus oeni of carbohydrates and amino acids, a variety of metabolic end products can be produced during malolactic fermentation. Some of the compounds produced have pleasing sensory properties, while some do not. The most famous is diacetyl, which is influenced by not only the wine bacteria used, but also by the timing of inoculation. Recently, Sumby et al. (2013) have demonstrated the presence of esterases in wine LAB and have clearly shown they can modify the ester profile during the course of MLF in wine. Cappello et al. (2017) has shown great variability in glucosidase, esterase, proteases and citrate metabolism in wine bacteria which will affect wines in a positive way, both texturally and sensorially.

Diacetyl is produced by O. oeni as an intermediate in the metabolism of citric acid. In this pathway, the intermediate, pyruvic acid, is reductively decarboxylated to diacetyl via α-acetolactate. Since diacetyl is chemically unstable, it can be further reduced by active O.oeni or by yeast to less flavour-active end products. When present at a high concentration in wine, diacetyl will be perceived as overtly ‘buttery’ and can be regarded as undesirable by consumers. Whereas, lower concentrations and depending on the style and type of wine, it is considered to contribute a desirable ‘buttery’ or ‘butterscotch’ flavor character. Co-inoculation has a very strong impact on wine as shown by the work of Knoll et al. (2012), especially on the fruit perception in white wines. Using a co-inoculation strategy in white wine or in red wines is therefore a powerful tool to enhance the fresh fruit driven styles and to avoid the production of diacetyl, even with bacteria well known for high diacetyl production. When used in post AF inoculation, the potential of diacetyl production is strain dependent. 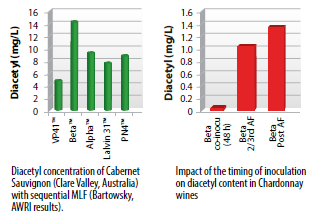 Of the many fermentation derived volatile compounds that contribute to wine aroma and flavor, the ester profile is of major importance for fruity sensory properties. Several studies have shown that O. oeni strains possess esterases that can synthesize the fruity-berry impacting esters during MLF. Different wine bacteria can vary in their esterase activity – whether it is high and low activity (Sumby 2013) and the Lallemand wine bacteria have been extensively characterized for this activity. For example, studies have shown that two esterases (EstA2 and EstB28) synthesized ethyl butanoate and ethyl hexanoate to varying degrees. These ethyl esters contribute to the berry-fruity character of red wines. 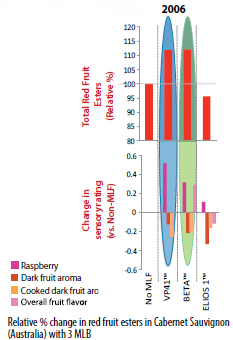 The importance of wine bacteria interaction with wood during MLF in wine has been demonstrated with the conversion of glycoconjugated oak precursors to vanillin by bacterial glycosidases (Bloem et al., 2008). The capacity to hydrolyse glycoconjugate aroma precursors is dependent on the wine bacteria used and the substrate. O. oeni can release volatile oak-derived compounds, so when MLF is conducted in barrels, it can augment oak characters in wine such as coconut, clove and vanilla aroma. For instance, Alpha™ produces more oak-derived compounds especially compared to spontaneous MLF. 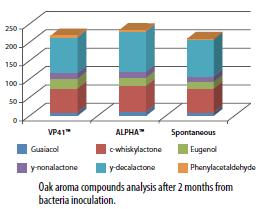 A recent study carried out by R.M. de Orduna (École Supérieure de Changins) is showing that some wine bacteria are able to degrade several volatile aldehydes that are known to cause herbaceous odours and green notes in wines. The below figure shows that an efficient MLF with O-Mega™ was associated with a progressive degradation of volatile aldehydes. 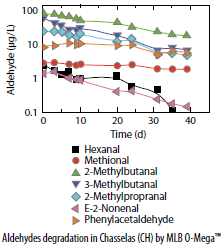 The results of Lallemand coordinated studies with many worldwide partners highlight the positive effect of some of our selected wine bacteria on the sensory impact of wine and to reveal different desired aromatic expressions (floral, fruity, spicy, buttery aromas, structure, mouthfeel, ...). By looking at the over-all impact throughout the fermentation process, the choice of wine bacteria and the timing of inoculation are critical to the wine style. Each wine bacteria impact differently on the wine sensory profile. 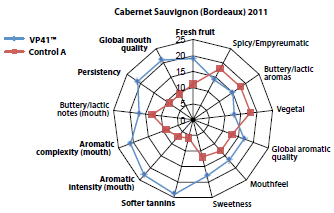